Last month the other half and I visited Galway to catch up with some old friends and to dine at Aniar Restaurant, the city’s first Michelin star restaurant.

You might think travelling cross-country from Belfast to Galway for dinner sounds extravagant and ordinarily this food blogger does not live the high life dining in Michelin Star restaurants, but he had received a rather generous work bonus and I had some sway in spending it.

Close to Ayre Square in the city centre, Aniar (pronounced A-neer) has held its one Michelin star status since 2013 and is described as a terroir based restaurant. Aniar uses seasonal produce from the west coast of Ireland and this is reflected in the ever-changing tasting menu. 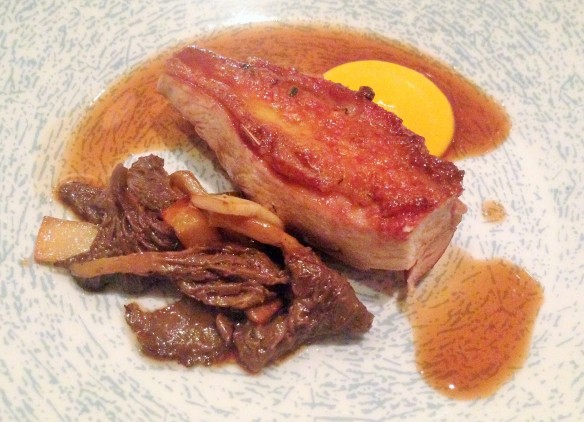 At first sight the Aniar menu gives little away and cryptic descriptions lend dishes an air of mystery. A friendly waiter explained to us how the menu worked – although on our long journey down the N17 it was predetermined we would choose the eight course tasting menu and paired wines costing 130 Euros each.

Pre-appetisers of black garlic toast and rosemary, and dehydrated cabbage with steamed razor clams were delivered by I believe JP McMahon himself – head chef and proprietor. In the spirit of immersing myself in the culinary unknown I cast aside my aversion to garlic and most fish types and enjoyed the crisp, black toast which was surprisingly sweet.

Aniar restaurant is a small and intimate space; a white dresser displaying homemade preserves, an open kitchen to the rear and dimmed lighting created a relaxed and almost homely atmosphere which I have often found lacking in ‘highly praised’ restaurants where pretension permeates the air. 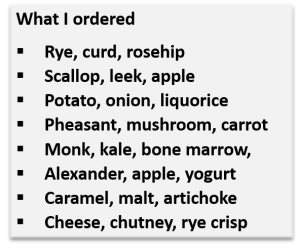 Each dish was presented by a knowledgeable waiter who described the cooking process in great detail and even though the volume of information was intense, with the visual aid of each plate, I completely understood what I was about to eat.

Paired wines complemented each course and my favourite was, Muros Antigos Vinho Verde 2013, a fruity white wine chosen to match the first cold course of rye, goat cheese curd, with rosehip and rhubarb.

The bread board served during the cold starters included a cheese scone, sourdough bread and a dark stout and treacle soda with two types of butter.

The attention to detail Aniar affords each dish was evident on that bread board; we had a seaweed butter and a regular version which was sprinkled with sea salt for added crunch and worked well on the moist soda bread, rich and sweet with treacle.

Some dishes challenged my own ‘food rules’ like delicate rounds of raw scallop served with apple and a smoky burnt leek puree served cold, and others jumped of the menu like potato, onion and liquorice.

When this plate arrived the vibrant colours and artistry in the presentation had the visual wow factor; from the midnight blue potato to the deep purple liquorice crisp and sweet golden onion filled with a creamy liquorice sauce – the dish was rich with aniseed and I loved it. 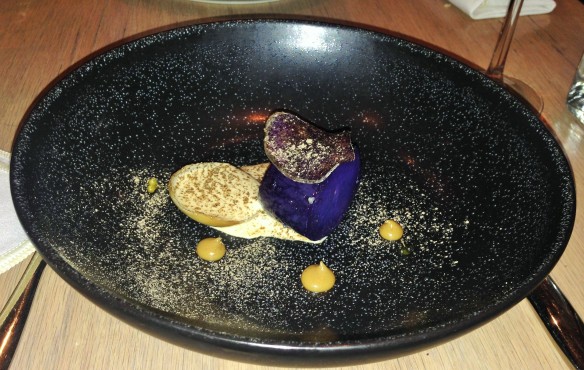 Each new dish that arrived equalled in flavour the empty plate it replaced and I had been greatly rewarded for leaving my culinary comfort zone; none more so than when I tried pheasant for the first time and salivated as the tender, juicy meat and crisp skin melted in my mouth.

The only dish I was apprehensive about trying was the monkfish, but after one mouthful I realised my fears were unnecessary. The monkfish was meaty and juicy and a celeriac puree, sweet parsnips and crispy kale complimented it well. 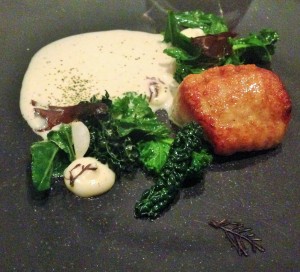 A creamy bone marrow sauce brought everything on the plate together in harmony and if the wine portions had been more generous I might have had the nerve to request more bread to mop up the thin streaks of sauce my monkfish could not gather.

At the end of our main courses we had an apple granita; the sharpness of celery and cool apple was balanced perfectly with a sweet sheep foam yogurt to create a fresh palate cleanser.

The penultimate course of our food odyssey was dessert and we both opted for the caramel, malt and artichoke. 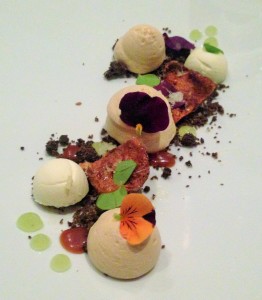 The sweetness of the caramel mousse and little blobs of dark, rich caramel sauce when combined with the artichoke ice cream and malt crumble was heavenly.

To round off the evening I choose the cheese board which was paired with a port wine. Presented on a black slate, with a little jar of rye crisps and pot of chutney the best of Irish – a goat, smoked and rich cheddar – was a cheese lovers dream.

Over the course of the evening we received a generous glass of wine with seven of the eight courses – the apple granita the exception – and we both agreed choosing the paired wines was the perfect way to compliment the food especially on a first time visit.

The only slight negative was a half hour wait between the cold and warm starters which I felt disrupted the flow of the tasting menu. I had my complimentary wine almost finished by the time my pheasant arrived– although this maybe says more about me as a supper not a sipper than the tempo of the dining experience.

Any mild feelings of impatience – born out of a desire to sample more food – quickly dissipated with the quality of the dishes that followed and in hindsight, perhaps this pause was intentional to take us from the cold to hot section of the menu.

As we finished off our last drops of wine both parties admitted to being pleasantly full and mildly tipsy and that the three-hour epic had been worth every penny – an evening at Aniar is event dining at its best.